David McDuff “Notes from an Island” 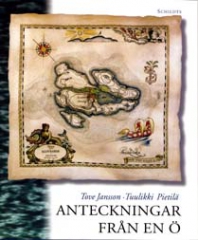 As a new item in the literary presentations series, I’m publishing a short translated extract from Notes from an Island (Anteckningar från en ö, Schildts, Helsinki, 1996), one of the last books by the Finland-Swedish author Tove Jansson (1914-2001) – most famous for her “Moomin” books for children, but also a distinguished writer of adult fiction.

For over twenty years the small island of Klovharun, at the outermost tip of the Pellinge archipelago, about 80 kilometres east of Helsinki, the Finnish capital, and some 30 kilometres south of the town of Porvoo, was the summer home of the writer Tove Jansson and the artist Tuulikki Pietilä. This book is an account, by both women, of those years, in which they built a cottage on the island and then lived and worked there for considerable periods of time, away from “civilization”.

The book is written in the style of a memoir with diary entries, and is illustrated with tinted drawings and watercolours by Tuulikki Pietilä. The early chapters describe the days during the early 1960s when the couple were exploring the Pellinge maritime region and found the small island where they decided to build their home. We are introduced to Brunström, the taciturn and opinionated local fisherman and workman who helps the two women in their search and gives them advice on building permission and other matters. With his colleague Sjöblom, Brunström is portrayed with humour as a character born from the surroundings and traditions of Finland’s small Swedish-speaking community – in some ways he could almost be a character from one of Tove Jansson’s Moomin books, which also mirror aspects of Finland-Swedish life, with its sense of a culture within a culture, the expression of a people without a homeland as such, but with a strong sense of ethnic and cultural identity, and a close affinity with nature. Some of the diary entries in the earlier part of the book are presented as being the work of Brunström himself.

Tove Jansson describes the little island in detail, reflecting the way in which it represents all the aspects of Finnish nature in microcosm: the miniature forest, with paths, the exposed rock face, the central lake or lagoon, the seagulls and other birds, which the author portrays as being unhappy about the invasion of their living space by two human individuals. The construction of the house, which involves much blasting and dynamiting of rock, is recounted in detail, with copies of lists and surveyors’ notes, and Tove describes how she and Tuulikki conceived the plan for the building: it was to have windows facing all the points of the compass: “one for the great storms, one for the reflection of the moon in the lake, one for the hill with its moss and polyps, and one facing north ‘so we can see what may come sailing along and so have time to get used to it.’”

One chapter describes the experience of watching the great break-up of the sea ice in springtime, and one receives a sense of the tiny world of the island as part of a huge natural universe of movement. The timelessness of the place is evident – and yet always the two women impress their creative skills on their environment, turning a remote and deserted rock-face into a workshop of artistic endeavour, without ever spoiling the harmony and equilibrium of the landscape and its creatures. We follow their day-to-day life, with its constant struggle with the elements, as when the sea carries away their entire supply of firewood, its trips to nearby communities for the essentials of life, its lists of supplies and tools, its outboard motors and above all the boat Victoria, which suffers shipwreck one stormy night, at the book’s climax.

In addition to being a miniature tour de force of autobiographical “desert island” writing, Notes from an Island is also an important document that gives an insight into some of the existential sources of Tove Jansson’s literary talent. In particular, we begin to understand from within how the world of the Moomins developed, as we follow the author’s deep and intuitive relation to the place and the living creatures that inhabit and frequent it – the gull Pellura, the seabirds, the local people, the postman, the cat, and so on. The illustrations by Tuulikki Pietilä complete the evocation of this world, that is at once very real and concrete and yet also suffused with a strange, muted, almost fairytale-like radiance.

from NOTES FROM AN ISLAND

I love stone: the cliff that falls straight into the sea, the rocky hill too steep to climb, the pebble in my pocket, prising stones from the ground and heaving them up and rolling the biggest ones straight down the hill into the sea! Down they rumble, leaving behind an acrid smell of sulphur.
Searching for stones to build with, or simply stones that are beautiful, in order to make mosaics, bastions, terraces, pillars, smoke ovens, or strange, unusable contraptions made just for the sake of it; building jetties that the sea will take away next autumn; building more wisely next time, though the sea will take it all away again.
My father was a sculptor, but Tooti’s was a carpenter, and that’s why she loves working in wood, whether it’s shifting magnificent, heavy planks about or playing with feather-light balsa. In the forest we searched for juniper wood. On the shore we sometimes found strange, hardy species of trees with unfamiliar names. Tooti used them to make small objects that need time and great patience – why not make the smallest salt-spoon that has ever been made?
‘But,’ says Tooti, ‘it’s quite different when you build on a large scale, you have to be resolute and absolutely sure of your ability to measure and calculate and make it all work out to the last centimetre. Or millimetre.
‘Sometimes building is done in order to hold and make steady, and other times it’s in order to decorate: sometimes it’s both.’
Incidentally, Tooti’s engravings are done in pear-wood or beech, her woodcuts mostly in birch.
She would often discuss materials with Albert Gustafsson in his boatshed on Pellinge; they also chatted about boats. He gave her suitable pieces of teak and mahogany to play around with, and Tooti took them all home with her and thought up ideas that were totally new.
It was Albert who made the boat, in 1962, from mahogany, four metres long and clinker-built. It was the most beautiful boat that had ever been seen on that whole stretch of the coast. She was strong and supple, and positively danced on a heavy sea, her name was Victoria, as both Tooti’s father and mine were called Victor.
Gradually, as the summers went by, Victoria became more and more Tooti’s as she was the one who loved the boat most and looked after it with the utmost care.